Heads Up! Another Satellite is Falling to Earth 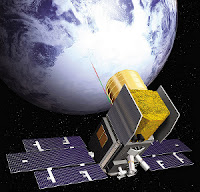 Article first published as Heads Up! Another Satellite is Falling to Earth on Technorati.

Pieces of another crippled satellite, this one the German ROSAT, are expected to fall to Earth this weekend, with perhaps thirty fragments surviving re-entry, including a one and a half ton, heat-resistant mirror traveling at 280 mph (450 kph).


The orbit of ROSAT takes it over the highly populated area between 53 degrees north and 53 degrees south latitudes. You can follow the current orbit here and view re-entry statistical animations.

Odds of someone actually being struck by a piece of the defunct ROSAT satellite are about one in 2000. Those are higher than the one in 3200 chances of being hit by the UARS satellite last month.

The six ton UARS (Upper Atmosphere Research Satellite) fell out of orbit and plunged into the Pacific Ocean around midnight on Sept 23, 2011. It briefly captured the worlds attention and spawned sales of 'I Survived The UARS Satellite Crash' T-Shirts.

Earth's orbit is clogged with the debris of fifty years of space exploration. A cloud of space junk orbits our planet which consists of more than 370,000 items including chunks of old satellites and rocket booster engines. Occasionally, the orbits of some of these objects degrade to a point where they are captured by Earths' gravity and fall toward the ground. Most of these are small and burn up upon re-entry. 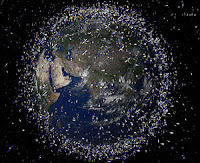 Scientists are concerned we may have reached a 'tipping point' where continuous collisions could make passing through Earth's orbit too dangerous, potentially ending space travel as we know it.

The problem reached a critical level when the Chinese tested an anti-satellite weapon in 2007 which may have added 150,000 new pieces to the debris field. This was followed by a collision of two orbiting satellites in 2009. These two events doubled the number of objects in the space junk cloud and may have brought us perilously close to being trapped on Earth.


This gauntlet of debris may pose too great a risk for astronauts to pass through, and recently forced six residents of the International Space Station to take shelter in two docked Russian Soyuz spaceships when a piece of space debris threatened to strike the station.
United States Defense Advanced Research Projects Agency (DARPA) released a report in 2009 called 'Catchers Mitt' which looked closely at the problem.

Strategies to deal with this envelope of space trash have ranged from lasers, nets to giant space sweepers, but the problem continues to snowball and no action has been taken as yet.