First published as, "Massive Study Proves Climate Change is No Hoax" on Technorati 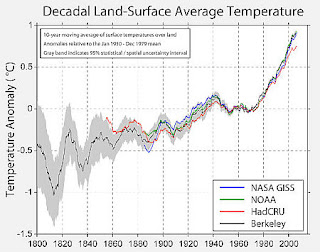 An independent review of more than one and a half billion temperature records from fifteen sources over more than a century  clearly shows that the planet is warming. Researchers at the University of California, Berkeley have confirmed previous reports that global temperatures have risen by 1 degree Celsius or nearly two degrees Fahrenheit overall.


The team included a 2011 Nobel Prize winner in Physics, Saul Perlmutter and various climatologists and statisticians. Compiling a huge open database of temperature records, researchers found a striking correlation with earlier American and British studies and the data clearly supports the conclusions that warming is occurring.

This study is the most comprehensive and thorough to date and focused on some nagging questions about the debate. According to this statement:


" The most important indicator of global warming, by far, is the land and sea surface temperature record. This has been criticized in several ways, including the choice of stations and the methods for correcting systematic errors. The Berkeley Earth Surface Temperature study sets out to to do a new analysis of the surface temperature record in a rigorous manner that addresses this criticism. We are using over 39,000 unique stations, which is more than five times the 7,280 stations found in the Global Historical Climatology Network Monthly data set (GHCN-M) that has served as the focus of many climate studies."


Skeptics have long criticized the use of data sources considered of 'poor' reliability. However, the results remained surprisingly consistent regardless of the perceived accuracy of some reporting stations. Despite local variations, the overall trend remained the same as stations considered 'reliable'.
Researchers found that there is an 'urban heat effect' which is significant to the local area. However, as less than 1% of the global land area is urban, these 'heat islands' were not deemed significant to the planet's overall climate.

Confusing the issue is data that shows one third of stations, many in the US and northern Europe, reported cooling over the last seventy years.

These cooler readings could be due to local variations and expected background 'noise' in the data. It may also be evidence of uneven warming of the planet.
Changes in ocean currents, wind and storm patterns will undoubtedly cause some areas to experience colder, wetter winters and more severe storms.

It also shows that in those areas experiencing warming, temperatures may have risen much higher than the global average of 1 degree Celsius.

In fact recent studies show temperatures at the poles continue to rise faster than other areas of the globe. Disproportional heating at the poles has contributed to the rapid disappearance of sea ice and thawing of permafrost, releasing even more CO2.

You can review the data here  and draw your own conclusions. The evidence seems overwhelming but a vocal minority of skeptics and a lack of political courage continue to thwart any action as temperatures rise and we move ever closer to a possible climate 'tipping point'.

Posted by Michelle Blowers at 10:26 AM