A new generation of smart watches is ready to hit the market. Sporting Android OS, these watches do much more than tell time, they provide quick access to email, text, social networking sites, videos and even take phone calls.

Two start up companies are poised to enter the market. The "I'm Watch" from Italy does not support wifi, but will tether via bluetooth to your smartphone and provide web access using your existing data plan. Download music, videos and apps from the new "I'm Market", which is the I'm Watch online store.

The I'm Watch sports a curved 1.5 inch, 240 x 240 pixel multi-touch screen and weighs about 70 grams or about 2.5 ounces. It comes in a rainbow of colors and styles and is powered by a Freescale IMX233 CPU (454MHz) and 64 MB of memory. Its 450mAh battery can run for about 24 hours on standby and about four hours when running apps. Speaker and mic are included.  (specs are here: .pdf)

The I'm Watch starts at 299 euros or about 423 dollars. With 50% up front, delivery is expected in about 90 days.  It currently runs Android Donut 1.6 for its' lower memory consumption, but backports for Froyo and Gingerbread are available. 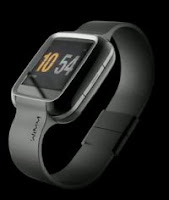 WiMM Labs is offering up a platform for a variety of small, Android powered devices which provide wifi and bluetooth connectivity, an accelerometer, magnetometer and vibrate alerts.

They envision a range of smart gadgets including wearable watches, pendants and belt clips. Other useful WiMM powered devices might include clip on bike models and usb powered mini-computers.

The WiMM powered watch features a 1.4 inch color, touch screen display. It supports up to 32 MB of memory, its water resistant and only weighs 22 grams or less than one ounce.

Use it to screen calls, texts and social media. It will come loaded with custom watch faces and handy apps for caller ID, Calendar, Weather and more.

No more digging through a cluttered purse or fumbling for a smartphone in your pocket. Get ready for a new generation of android powered mini devices which will make information, networking and social media even more accessible and useful than ever before.