What You Should Know About E-Waste Disposal

Electronics make our lives easier and have become pervasive in the 21st century. Prices have fallen to a level where many devices are considered nearly 'disposable' as they are frequently upgraded.

Electronic Waste, or e-waste, is everything from televisions to cell phones, laptop computers to hard drives.According to the EPA, of the 1,440,000 tons of e-waste generated in 2010, only 649,000 tons was recycled, or only 27%. Where does the rest go? A staggering 1,790,000 tons winds up in landfills in far off places like China, India and Africa. Barges loaded with tons of your discarded gadgets are dumped in many developing countries with loose environmental regulations.

An entire industry has grown up around picking through these mountains of electronic junk to collect metals, parts, and other recyclable materials. The health effects to the people who struggle to make a living doing this, and the consequences to the local environment is huge.

The city of Guiyu, China was once a rice farming village. It now is a major e-waste dumping ground and the local pollution has rendered the area unable to produce crops and poisoned the drinking water. According to Wikipedia:

"Many of the primitive recycling operations in Guiyu are toxic and dangerous to workers' health with 88% of children suffering from lead poisoning. Higher-than-average rates of miscarriage are also reported in the region. Workers use their bare hands to crack open electronics to strip away any parts that can be reused- including chips, or valuable metals such as gold, silver, etc. Workers also "cook" circuit boards to remove chips and solders, burn wires and other plastics to liberate metals such as copper; use highly corrosive and dangerous acid baths along the riverbanks to extract gold from the microchips; and sweep printer toner out of cartridges.

Children are exposed to the dioxin-laden ash as the smoke billows around Guiyu, and finally settles on the area. The soil has been saturated with lead, chromium, tin, and other heavy metals. Discarded electronics lie in pools of toxins that leach into the groundwater, making it so polluted that the water is undrinkable. To remedy this, water must be trucked in from elsewhere."

Aside from the environmental impacts, a huge amount of personal data remains on these devices and can be retrieved and sold on the black market. In fact, your old hard drive could be worth as much as $200 USD to criminal organizations which use the information for identity theft, fraud and blackmail.

According to David Brown, manager of Tech Guys in California, most people don't consider what happens to their data after the computer becomes obsolete. "We remove confidential information from donated machines every day," he said. (see Discarded Computers Reveal Your Secrets 10/03/2011) 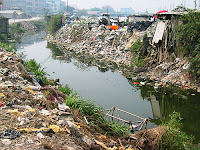 Cities like Guiyu exist all over the developing world. They are slowly poisoning the environment and the people who live there while providing rich picking for identity thieves. What can you do to make sure your old electronics are disposed of safely?

Be sure to donate your old equipment to a reputable e-waste recycling company which has been certified through the EPA. Ask for your old hard drive back when you upgrade or remove it from the machine before you donate. You can wipe your hard drives' data using a powerful and free program like 'Darik's Boot and Nuke', (DBAN http://www.dban.org/).

In the Butte County, California, area your choices for certified e-waste disposal include 'All Green Recycling' at 800-780-0347 and 'Computers for Classrooms' at 530-895-4175 or you can search for e-waste recycling for more options.
Posted by Michelle Blowers at 11:43 AM